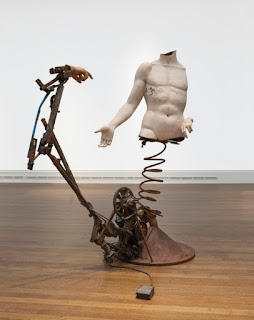 Landy’s Saints dip, swing, sway, totter and pull in masochistic rites that perpetually re-enact their martyrdom. Made from bits of mechanical scrap and fibreglass, these creaky, robotic figures are figural quotations from the National Gallery’s collection of old masters. The original paintings are surviving images that immortalise the exploits of the saints whose altruism and superhuman acts of sacrifice and suffering have served as Christian exemplars of religious faith. Such was the extent of their belief that they would endure agonies to uphold their devotion.  It’s hard today to imagine what cause we would suffer similar ordeals to protect. Perhaps only the outbreak of war might confront us with similar crises of conscience

It’s that gap between medieval religious faith and today’s cultural agnosticism and doubt that interests Landy. Walking through the gallery at the outset of his residency at the gallery in 2010, he was drawn to the images of heroic acts and determination that characterise the lives of the saints. He was also given a copy of the Golden Legend, a 13th century compendium of saints and their lives for inspiration. Landy here conflates his longstanding interest in mechanical sculpture with spiritual painting. After three years of drawing and thinking, the resulting project is an honest and funny rendition of stories that may feel remote within Britain’s Protestant, sceptical culture but much less so in a Catholic society where saints’ festivals define the calendar or relics grant prestige to a town.

Designed to be creaky and poised on the edge of dysfunction, many of the sculptures were broken on my two visits. This can feel frustrating but it also reasserts the handmade quality of these machines using scrap parts that are exposed to view. Metaphorically, these artificial bodies suggest the extraordinary physical strength and willpower of saints but also their fragility. Their stories convey both superhuman power and the appalling vulnerability of flesh subject to extreme violence. Landy’s saints are designed to display their own mechanical wounds. Jesus’ torso will gradually become permanently marked by St Thomas’ poking figure and so too St Jerome bears the repeated thrust of the rock against his chest as his struggles to expel the thoughts of Rome’s dancing girls during his seclusion in the Syrian desert. What’s shocking in the echoing gallery is the actual sound of the rock thumped against the body or of St Apollinia pulling out her own teeth.

Landy also exhibits collages of random limbs taken from historic paintings. These fragments allude to the breakdown of the body that is so intrinsic to martyrdom.  He also draws a cluster of interlocking objects and limbs to produce a quirky ‘Self-chatisement Device’. What he calls these ‘barmy stories’ provides the foundation for Western art. Image making arose in an age of illiteracy. Religious belief would be served through visual dramatisation. Landy has taken this tradition and introduced absurdity. It’s not a direct assault on religious observance but rather a satirical exploration of the human need for heroes. What remains is an underlying pathos and astonishment at the trials borne by the human body and mind in defence of conviction.
Posted by Unknown at 23:35 No comments:

'Alexander Calder After The War' at Pace, London 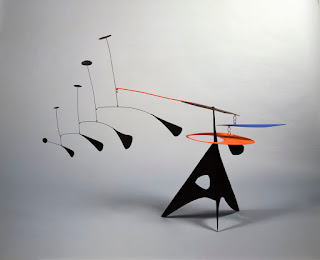 From a distance of sixty years Alexander Calder’s mobiles, stabiles and standing mobiles embody the best attributes of modernist sculpture. They possess a self-sufficient ecology of balanced colour, shape and weight. But their success also carries the risk of fatigue. In singular isolation, they can feel overexposed and even drained of life while occupying an iconic status in public collections. Pace’s London show has ambitiously assembled the post-war sculptures made between 1945 and 1949 facilitated by the renewed availability of aluminium. Lit and elevated on circular platforms, the works are given the reverence of a museum display.
.
Our enchantment with the mobile reaches back to childhood and suspended toys. Calder’s sense of pleasure in aligning organic forms with physics is indisputably charming. These post-war pieces revive optimism in art and refute the anxious introspection of Abstract Expressionism or European Art Brut. ‘Blue Feather, 1948’ stretches out into space along horizontal and vertical axes. Splashes of black droplets are interlaced on wire like growing leaves and produce tension with a pierced red disc sitting flatly over the spike of the supporting tripod. Energy moves the structure until equilibrium is found. Hand in hand with solid form, light also articulates the sculpture in shadow across the floor.

Calder’s watercolours exhibited simultaneously here employ a language of primitive figuration as if drawn on the surface of a cave. Other pictures present biomorphic spirals and orbs redolent of Miro’s Surrealism. But these sketchy washes of colour and line resemble private studies and confirm Calder’s natural affinity with sculptural process rather than suggest a dextrous application across media in the vein of Picasso.

Each Calder sculpture, whether floating in free space suspended from the ceiling or sitting deftly in miniature on a plinth and stored in a re-conditioned cigar box, finds an intrinsic co-ordination of colour, line, materials and flow. What Calder paradoxically achieves is stillness through activated animation. His kinetic experiments are entrancing and satisfying, aligning material manipulation with observation like the raked pebbles of a Zen garden.