Gerard Byrne's A State of Neutral Pleasure at the Whitechapel Gallery 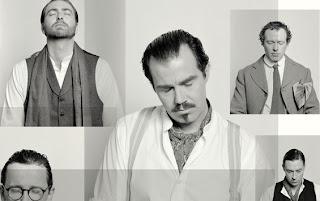 Is it possible to resuscitate the past and re-animate it? Gerard Byrne is interested in trying to restage forgotten conversations. He makes films with actors speaking the text of old seminars and debates retrieved from publications. The film ‘ A Man and a Woman Make Love’ reproduces a conversation among male Surrealists in 1928 which was first printed within their magazine, ‘The Surrealist Revolution.’ Examining erotic and romantic love between the sexes, these avant-garde dandies veer from analytic curiosity to the smutty humour of a team changing room. All through this re-enactment Byrne signals the contrived quality of the project. Sometimes the camera shot pulls back to reveal a live audience in a Dublin television studio. The actors stray into the declamatory ‘hammyness’ of amateur dramatics.

I saw this film at Documenta last year staged within the modest space of a post-war hotel ballroom erected in bomb-damaged Kassel, temporarily hosting Byrne’s enquiry about how a contemporary audience might consider Surrealist theatrics. In Whitechapel Gallery’s largest room, the film lost some of its incongruous peculiarity. What connects the film to Byrne’s other work in the show is the artist’s consistent curiosity about attitudes and belief across recent history.

Upstairs, two further films revive old discussions from Playboy magazine addressing sexuality in the 1970s and futurology from 1964 leaving the viewer to witness the ironic predictions of an era long since overtaken by the anticpated future. Accompanying these Playboy re-enactments is an advertorial conversation between Frank Sinatra and the Chairman of Chrysler published in National Geographic Magazine in 1980 and presented on the page as if it were a piece of genuine journalism. We see the new car carrying the hopes of a company struggling to survive. But Byrne shifts the action within the film to a grimy New Jersey diner. The aspiration symbolised by the luxury car bearing the latest technology is undermined by the industrial decay lying around the performers. Hopes for the future may well become ambushed by crisis.

These films suggest an easy flow of ideas but the audience is ‘alienated’ in a Brechtian sense by their artificiality and awkwardness. Byrne revels in the tension prompted by these debates re-offered to us across time. Perhaps the most successful works in the exhibition are the three black and white photographs of newsstands in Paris evoking the timeless romance of the city’s characteristic street design. Each work is titled according to the gap between the moment they are hung and the date when they are photographed. So the images are permanently in flux and are intrinsically unstable. They suggest a timeless and unchanging Paris sought by the tourist and the hunter of ‘authenticity’ but these photographs will continue to slip away into the past on each occasion they reappear on exhibition.

Byrne is one of the most intellectual artists working today and demonstrates a genuine enthusiasm for opening up a dialogue with history. We accompany him on these disorientating excavations. As we watch these films, the content recedes further away from us across an unbridgeable chasm and yet we can’t quite pull away.
Posted by Unknown at 12:23 No comments: 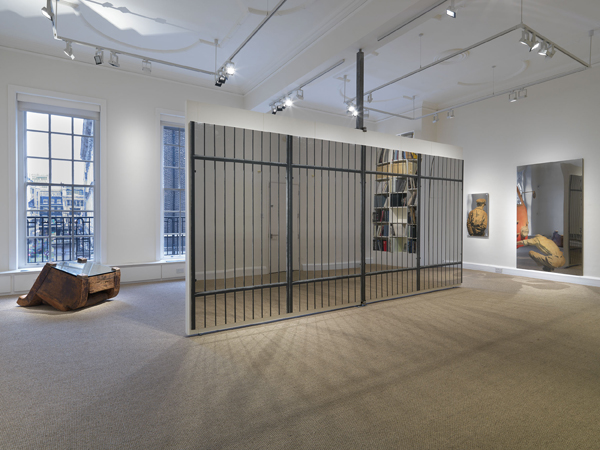 Historical conflict dominates this exhibition of work made in the 1960s and 1970s when Italy faced the emergence of armed guerrilla groups. Michelangelo Pistoletto does not offer ideological positions but instead examines intense passions and high stakes during Italy’s  ‘Years of Lead’. Employing his now familiar polished steel panels, the artist incorporates and implicates the viewer within the charged image. As the context recedes into the past, he establishes a dramatic irony whereby the viewer is increasingly removed in time but remains formally present on the surface of the picture and thus our place within a social discourse becomes explicit.

‘La Gabbia’ (The Cage) 1965 survives as four panels from of a former New York exhibition of 29 pieces on which prison bars are screen-printed. Paradoxically the viewer assumes the role of both prisoner and guard. The eyes gazing at this sequence of bars are reflected back from beyond the grill. As our physical presence animates the work, ‘La Gabbia’ entraps us in ideological and political debate.

Within ‘Comizio’ (Rally) 1965, a newspaper photograph of two middle- aged men in suits standing amidst an invisible crowd is copied onto tissue paper and applied to the polished stainless steel. Such scenes would have been familiar to Pistoletto within his native Turin. One figure holds a red flag crowned with a star and such iconic images of revolutionary agitation will undoubtedly resonate for an older generation. This appropriation describes historic struggles for a better world but which now seem anachronistic and tainted with failure. Moving from the street to domestic life, a found armchair (Mobili Capovolti) is turned upside down and a mirror is attached to the underside. What is usually hidden is violently exposed to scrutiny while the viewer is pulled into something that can no longer be narrated at a distance.

Mounted on a modest scale, this show revisits Pistoletto’s incisive use of contemporary motifs to analyze social crisis. Today these loaded artworks have become oddly estranged from their origins as they sit within a commercial setting offering the promise of lucrative investment.
Posted by Unknown at 09:04 No comments: