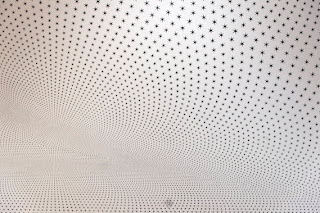 Commissioned by the curator Theo Tegelaers as part of a programme of works titled ‘A Contemporary View of the Rijksmuseum’ enlisting artists to explore the museum’s collections and role in national life during the building’s redesign, Wright’s ceilings are the only project that will survive into the foreseeable future. Having spent six years as young artist living in Amsterdam and visiting the museum, Wright was largely inspired by the architectural features of the building particularly the brickwork rather than the restored murals that line the Hall of Honour leading to the ‘Nightwatch’. ‘We worked by consulting with the architects about potential spaces in the museum for Richard to use for a permanent work. The two spaces were chosen because they were not specific exhibition galleries but took their cue from the building in that they offer an orientation for visitors as a hub between various displays. Richard works like that by reflecting and thinking about the site.’ The ceilings depart from Wright’s usual practice of installing temporal work with a limited lifespan. While Wright accepts that it is impossible to anticipate priorities for the museum in the future, the ceiling murals were commissioned as a lasting intervention in the fabric of the re-designed and restored building.

The project took seven weeks for Wright and four assistants lying on top of scaffolds to draw and paint over 47,000 individual black stars of varying sizes that spread across the entire ceilings of each space expressing the architectural dimension of each room, unusual in the building for not being vaulted. The paintings were first designed and then transferred to the plaster by hand with chalk. Despite the large number of individual stars the work is subtle and restrained so that it is easy for visitors to pass below without necessarily noticing the technical virtuosity and hours of labour involved.

‘The work has a timelessness engendered by the way it unites painting with graphic and typographical pictorial elements’ says Tegelaers explaining the nuanced quality of the commission. ‘ It has a kinship with and is reminiscent of Renaissance murals, motifs from ‘still life’ in classical painting and the organic design idiom of Jungenstil, but it also embraces elements from contemporary subcultures like Goth and Punk’.

Richard Wright in the accompanying catalogue suggests that ‘the base material is time. The painting is made of this and it remembers. To me this gives the work a very specific material quality.’

Other works made for ‘A Contemporary View’ during the museum’s closure included Simon Starling’s ‘Drop Sculpture’ 2006-2008 when he cast three copies of the 17th century original model of the figure of Atlas on Amsterdam’s Royal Palace, which he then dropped and re-assembled and exhibited in an enquiry into authenticity and restoration. Dutch artist Fiona Tan photographed friends and acquaintances in the style of ‘Golden Age’ portraits belonging to the Rijkmuseum’s collection in a work titled ‘Provenance’ 2008 linking Dutch faces from the past with the present. Germain Kruip’s ‘Rehearsal’ between 2005 and 2006 slowly illuminated the empty shell of the museum building with a breath- like pulse of light at night after the removal of all the architectural accretions added over the years. On the opening weekend, Job Koelewijn choreographed a performance, ‘Carried On Hands’ with 800 school children in the museum square producing four images of paintings returned to public view in the restored building. This group will therefore represent a new generation discovering the museum and its collections after the long closure.

The Rijksmuseum has opened new galleries dedicated to Twentieth Century art and design where objects will be used to weave Dutch social and cultural history together but which also express the museum’s role as an international institution welcoming visitors from around the world. The curating mirrors the philosophy of the galleries displaying material from the Dutch ‘Golden Age’. Architectural models, airport signs, film, furniture and an aeroplane are exhibited alongside Modernist paintings from De Stijl and the CoBrA movements, sculpture and photography as part of the museum’s mission to explain Dutch historical trends and to enhance the Rijkmuseum’s role as a unique museum in the world displaying artefacts from history, design and art.

The museum director Wim Pijbes claims that the renovation works had produced a complete transformation of the museum as a building and collection. The guiding philosophy of the restored museum is to instil a sense of time and beauty.  The Spanish architects Cruz y Ortiz produced a winning proposal in the competition by advocating a new entrance to the museum in a newly created basement hub stretching across the entire site thereby allowing access under the public passageway running through the heart of the building that the original architect Pierre Cuypers was compelled to include to enlist the city’s consent. The old museum accommodated many such compromises and these were cited by the director for making a compelling case for stripping out numerous alterations to the original Cuyper’s design but at the same time modernising and updating the facilities for the future.

‘The original building of 1885 was not well received’ says Antonio Ortiz, the renovating architect ‘because it resembled a Catholic Cathedral in the predominantly Protestant Netherlands and many of the original decorations were subsequently covered up. But the original building was conceived as ‘Gesamptkunstwerk’. Original dimensions were altered in the 20th century and building had become labyrinthine and sad. We have restored the original dimensions while adding climate control, acoustics, fire precautions and new orientations to give the institution a renewed life.’

One hundred new additions to the collection acquired during the renovation include the Burgomeister of Delft and his Daughter by Jan Steen, 1655  and the Bend in The Herengracht by Gerrit Berckheyde, 1672 . In bold move, the museum decided to exclude new technologies within the galleries so that videos and digital displays are absent. The only concession to cutting edge materials is the use of vitrines that reduce light reflection. The museum will also make 125000 digital images available for public use on its website in a conscious move to open up the collections and to promote greater access without copyright restrictions.
Posted by Unknown at 08:46 No comments: 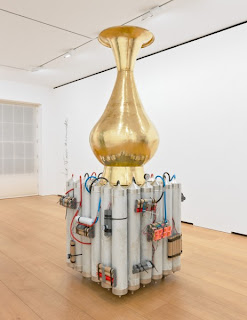 A giant, golden urn ‘Le Vase Abominable’ dominates this exhibition of recent work by Adel Abdessemed and matches the height of the artist. Strapped to the base are a series of gas tanks and explosives with a digital clock counting down to zero. It is a confrontational object marrying craft, luxury and danger. Operating as an absurd self-portrait, the object embodies both aggressor and victim. An ostensibly ‘Orientalist’ and desirable artefact is transformed into something to fear. This satirical thrust characterises the rest of the works on show and they are invested with historical and contemporary resonance. The exhibition does not illustrate a reassuring ‘hybridity’ across cultures but rather produces jarring encounters expressed in diverse media such as drawing, assemblage and animated film.

A series of smaller vases made of clay, salt, rubber, gold and marijuana sit on empty ammunition boxes like trophies of war rather than commodities or vessels. This thematic interest in aggressive acquisition and projection of power permeates the exhibition. And upstairs we meet a rendition of a naked child running from horror, ‘Cri’,  which appropriates an iconic scene from the Vietnam and translates it into opalescent blocks of carved ivory. Despite the gallery’s assertion that the ivory is ethically sourced, it is still a gory representation of human agony using a material associated with illegal animal slaughter. Naturally this confers an added frisson to the figure. Subtlety is neglected and instead Abdessemed sets up intentional provocation.

Charcoal drawings of singular unidentified soldiers achieve a universal summation of modern warfare. These young men hide beneath their uniforms and equipment, exempt from responsibility, appearing life-size as if standing a few metres away in real time and space.

As a nod to the host city, the artist has a made a drawing of the historic British, throne housed in Westminster Abbey. It represents archetypal power, faceless and unaccountable, casting a long shadow across a bleak landscape.

Abdessemed demonstrates technical skill and wryly addresses contemporary anxieties about the instability of the modern world. The exhibition manages to feed a prevailing paranoia and unease, but what’s missing is any confident ethical or political position. Instead, he tends to fall back on mocking subversion to achieve a rather theatrical and ultimately ephemeral effect.
Posted by Unknown at 06:50 No comments: 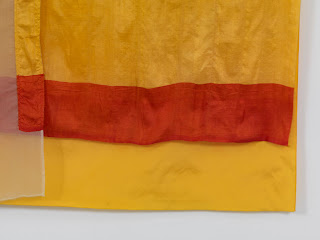 What a pleasure it was to see an exhibition in King’s Cross that reinvigorates one’s love of art with its potential to engage the senses. Such a show has just finished at Gagosian on Britannia Street with a collection of Rauschenberg’s Jammers available to see as a group of sculptures largely made with textiles arising out of his travels and changes in his life. Taking inspiration from Jammer sailing boats in Florida and fabrics that he saw on a residency in India during the 1970s, the artist shifted direction from his seminal combine paintings.

These soft, draping sails dispense with Rauschenberg’s early humour found in the rather jaundiced and ironic assemblages. The Jammers feel more invested with romance and an unrestrained enthusiasm. As such, they seem more instinctual and less premeditated. The hand seems to determine the outcome rather than a thought process. Stemming out of twin activities of sailing and weaving, the works assume an autonomous quality without wholly dispensing with reference to practical activities. Essentially, these works possess an open inquisitive quality that invites you to simply enjoy their material richness of texture, colour, overlay, crease and rhythmic threading. By turns limp and taut, the Jammers cross the line between image and object. In assembling materials together such as muslin, silk, rattan, tin cans and mud, Rauschenberg begins to construct assemblages of spare rigour and aesthetic power. On a cold, bleak day in central London these Jammers hint at tradewinds and spice, of tropical life determined by movements of the sun and wind and colours derived from earth and plants.

Perhaps the most seductive piece shown in London was a ‘jammer’ made from moulded grass and mud that carried its organic origins in the scent gently emitting  from the object propped against the gallery wall like a talisman. It hinted at farmyard dung but Rauschenberg has crafted this unidentified base material into a sculpture redolent of the elements of earth, wind and water that retain their raw presence in the gallery despite the sculptor’s intervention.
Posted by Unknown at 05:12 1 comment: