Light Show at the Hayward Gallery 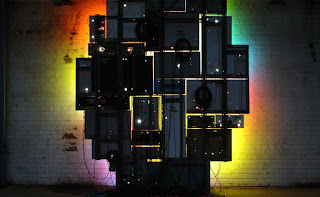 The cavernous size of the Hayward in ‘brutalist’ concrete lends itself well to that aqueous quality of light that fills a room and becomes tangible when it hits the wall. This is an exhibition that aligns the material of art to its temporary site. The exhibition includes phemenological encounters of the body and eye with more conceptual processes that open up consideration of light’s status and functionality.

This primary conversation is established in the first room where we meet Leo Villareal’s ‘Cylinder II’, suspended, multiple strips displaying tiny lights that turn on and off to produce kinetic patterns without any coherence. Villareal’s cylinder resembles high street design by employing computer-generated erratic sequencing. Here technology meets desire. It suggests an ironic comment on an ever-growing demand for ‘conversation pieces’ within the home, but his real interest lies in using software to operate a machine within the gallery. Adjacent is David Batchelor’s ‘Magic Hour’, a series of recycled lighting boxes taken from shops and takeouts. Now the original illuminated message or logo is obscured through reversal. We only see the boxes from the rear with all their electrical anatomy exposed while the deep colours are only visible as projections on the wall only hinting at their origins as commercial messages. These colours are vulgar and clash together on the wall, redolent of city streets and the familiar assault on the eye as shops compete for our pound. Villareal’s  achromatic  moving points of light is too strategic by comparison, lost in a world of immense technical potential but without much purpose. Perhaps this dystopian quality is the focus but the artist seems too dazzled by his own technical effects.

The exhibition is staged as a series of progressions so a work may sit architecturally within a space and is sometimes placed within their own environments. Anthony McCall’s cinematic beam of light is projected within its own darkness and Doug Wheeler’s Plexigas square is described as an object by neon lights which articulate the edges. One stands rather reverentially in the blue haze waiting for enlightenment much like standing before Rothko’s solemn canvases. Wheeler’s work has a pleasing, ambient glow but can’t match Cerith Wyn Evan’s ‘S=u=p=e=r=s=t=r=u=c=t=u=r=e’, a series of three floor to ceiling columns that throb with heat and light. They have an organic quality, illuminating slowly and tentatively so that you can almost hear them breathe. When the light arrives it’s reminiscent of the warm sun touching your face on a winter’s day.

A show exploring light wouldn’t be complete without the inclusion of James Turrell or Dan Flavin and the curators suitably oblige. Turrell’s ‘Wedgework V’ delivers all of his stagecraft in setting up illusions modelled out of projected light. Having navigated a pitch-black corridor you enter a ‘viewing’ space with seating from which you observe a ‘sensing’ space consisting of a triangular void given a sense of solidity. We are conscious of witnessing an illusion that toys with certainties of perception. As such is an actionless event and still-life, both ambient and objectified. This is a sensory experience that washes us in sanguinary and sticky colours of the spectrum associated with procreation and regeneration, orange, scarlett and magenta. Returned to the womb, you are encouraged to linger for fifteen minutes. There’s an invigorating rush like having a multivitamin shot. However, this headiness passes and what one remembers is something very aestheticized and fleeting.  Turrell’s work feels rather controlling as if we are being compelled to connect with the sublime. Having emerged from the strict parameters of the installation, the visitor leaves with a queasy feeling that the piece is not entirely honest.

By contrast, Flavin’s work is directly engaging. Such formal simplicity sits in sharp contrast with Turrell’s box of tricks. Using fluorescent tubes, Flavin made sculpture that openly addresses the ambivalence of light. Without investing them with a predetermined mystery, the naturally enigmatic quality of light is explicit. The austere integrity of minimalism is fully embodied in these works made from bare light strips. ‘The Nominal Three’ makes reference to ‘Ockhams Razor’, a philosophical principle of succinctness. Flavin creates a work that expresses the room’s dimensions and becomes an articulation of physical and numerical facts. The curators have included ‘Untitled (To the Innovator of Wheeling Peachblow)’ which blends colours emanating from a square sitting in the corner in order to match the peachy hue of an historic American glassware.

In the rest of the exhibition, there is a range of variable work that examines the properties of light including a lyrical quest in by Katie Paterson’s ‘Lightbulb to Simulate Moonlight’ to capture lifetime’s supply of moonlight. Jenny Holzer quotes a series of disturbing national security documents at dizzying speed across several stacked monitors and Fischli and Weiss satirise our fascination with light by using a small torch to project patterns from a mass produced plastic cup against the wall. Olafur Eliasson transforms water fountains into ice crystals with strobe lights, which has a ‘Willy Wonka’ charm, but quickly becomes impossible to watch and echoes the weakness of many pieces in the show that dabble in the theatricality of light.

While it might have been advisable to offer more structure to the exhibition by putting the work in historic context, some of the artworks manage to express those elusive but beguiling qualities of light human beings have always looked for in the natural world and managed to reproduce for practical, spiritual and cultural ends.
Posted by Unknown at 06:37 No comments:

Eva Hesse and Bruce Nauman at Hauser and Wirth 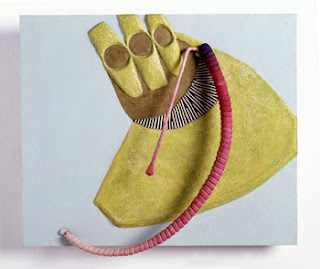 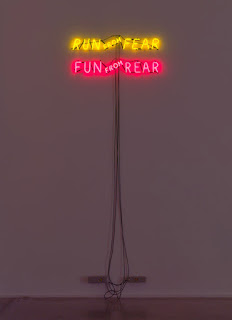 ‘Oomamaboomba’ is a suitably unpronounceable title for an enigmatic work, displayed amongst other reliefs made by Eva Hesse on a 1965 German residency. Sung aloud, it might sound like a musical riff. These works at Hauser and Wirth on Savile Row anticipate her mature and final sculptural pieces, famously described in a 1966 exhibition as a manifestation of a particular feminine ‘eccentric abstraction’ by contrast with the muscular materiality of sculptors like Judd and Andre. But this particular title has a suitably musical quality for a work that employs hot pink and lime shapes arranging themselves into snug fitting forms within the rectangular frame. ‘Oomamaboomba’ has a jazzy quality made from textured papier mache from which a curving handle of twisting twine rises into real space, from rose-pink at the foot to a wider indigo at the top edge of the picture. Another relief, ‘H + H’ juxtaposes acidic-lemon against fleshy-pink thereby evoking  a sixties’ trippy, hedonism. Across it flows a meandering wire, establishing tensions between shape, texture and colour.

Lent a room within a texile factory for her residency, Hesse plunders the found scraps of metal and cord to create fantastical reveries that possess a satisfying self-sufficiency. Alongside the reliefs are a series of drawings that combine the organic and artificial. Random parts seem to cohere into logical and complex interdependence. These line drawings of ink  on paper then evolve into more elaborate coloured paintings that resemble nesting boxes or compartments of imaginary objects which settle into co-existence. Description verges on the edge of elusive abstraction. All we see with certainty are linear forms of unidentifiable objects that appear to serve some functional purpose akin to the guts of a machine. But it’s the reliefs that seduce the visitor with their dichotomies of sharp and soft, line and form, flat colour and stripe, surface and relief. While demonstrating a self-possession that is difficult to penetrate, these hybrid painting/ sculptures suggest a pleasing reverie in which Hesse takes these materials on an adventure away from specific narrative, time or place.

Bruce Nauman exhibits his restless teasing in a companion show called ‘Mindfuck’ using neon, architectural installation, and a revolving carousel all dating back to the seventies and eighties. There are distinctive contrasts of subject and style with Hesse’s practice and it is inspired programming to place their two shows side by side. Nauman’s provocations test one’s mental boundaries. Apparent certainties of physical space and language are cunningly subverted. A giant box within the gallery operates as the facsimile of a room but in order to enter the visitor must walk down a tapering corridor until the body touches the walls and then is forced to twist ninety degrees to squeeze into a large space. Here you are steeped in green light resembling vomited bile or pickling acid. Skin becomes the colour of morbid ill health and hints at gangrenous decay. And so Nauman introduces a phenomenological encounter of the body with extremity. Instead of detached contemplation, you are immersed in an oppressive environment.

But there is little relief outside. A giant illuminated board neurotically states over fifty simple phrases that resemble ‘affirmations’: ‘I was a good boy, you were a good boy, we were good boys’. These statements momentarily light up and then disappear. On this giant neon, circuit board, we chart the randomness of life accompanied by an search for structure. The result is to feel anxiously out of step, persistently behind the flow of lit words that jump around. Cast as passive readers, we are trying to keep up with a language that begins to collapse under the weight of repetition. To watch this fluorescent messaging is to experience a symbolic nervous breakdown. Our grip on language as a thread of civilized communication is broken.

Finally, as if our bearings haven’t been disrupted enough, Nauman presents the visitor with a carnival of cruelty. A carousel of animal bodies and severed heads is held up by wire in a never-ending circular procession. It is almost unbearable to watch as their feet drag on the floor to make deep, scratched incisions, evoking hellish torture. With relief we read a darkly comic word piece above, ‘run from fear, fun from rear’, alluding to instincts of escape and sexuality. In Nauman’s world, letters merely need to slip out of place and we tumble into rhyming incoherence.
Posted by Unknown at 01:45 No comments: